by Gyansora
in Current Affairs of Assam
4 min read
ADVERTISEMENT

The awards are announced on the occasion of Republic Day every year.

On the eve of 72nd Republic Day, Govt. of India has announced all Padma Awardees for the year 2022. This time from Assam, two famous personalities will confer the highest prestigious civilian award – Padma Shri 2022.

In this post, we will know more about them – 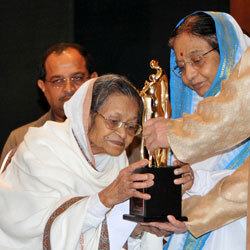 Several years of devoted service saw her deep involvement in training a large number of gram sevikas. As part of the Sarania Ashram, which Shakuntalaji is associated with, 22 Gram Seva Centres spread over the North East, serving the villagers, especially women and girls. The main activities are Nai Talim, Literacy, Balbadis, Yarn spinning and Weaving (Cotton and Silk Khadi) and Prakritik Chikitsa.

At the age of 101, Shakuntala Choudhary, respectfully known as “Didi”, is one of the senior-most personalities in the Gandhian fraternity of Assam. Even as a student, she was popular taking part in social activities during the Freedom Movement. Dhaneswar Engti is a renowned writer and lyrist from Karbi Anglong, Assam. He was born on 1 November 1955 in a small village of Palam Engti, Bithilangso (Dengaon). Dhaneswar Engti started his early education at Dengaon and passed his HSLC examination in 1972. He has completed his Bachelor’s degree (B.A.) from Diphu Govt. College in English literature in 1978. He completed his Master’s degree (M.A.) in English from Gauhati University in 1981.

Dhaneswar Engti started writing in 1965 when he entered Merrok Govt. M.E. School, Dengaon. He wrote in Karbi language for publication in the school magazines and Karbi monthly magazines published by different literary organizations from Dengaon and Diphu, respectively. After that, he started writing in the Assamese language in 1971 when he joined Dengaon Govt. Aided High School, Dengaon, for publication in school’s magazines.

What are Padma Award and its types

The Padma Awards are conferred on the recommendations made by the Padma Awards Committee, which is constituted by the Prime Minister every year. The nomination process is open to the public, and even self-nomination can be made.